My wife and I have yet to purchase Michael Pollan’s latest book Cooked, but we are Colbert fans and last week Michael was on to publicize it. Michael said his book could be summarized into a single concept: who’s cooking your food? “As long as a human being is cooking for you and not a corporation you are fine.” According to Michael eliminating corporations from cooking for you may be the single biggest aspect of a healthy diet.

He went on to explain a few of the reasons why, when the food industry attempts to cook for us, that they have such a negative impact on our health. First these businesses are really great at doing what they do and they can crank out any kind of food in massive quantities. When we go to the store we are bombarded by endless quantities of any food item our heart may desire. Many of these items we’d rarely if ever make for ourselves — which is key. If we cook for ourselves or one another then we naturally cut out a lot of junk food because it is too much of a pain to make.

Next corporations are going to select the cheapest ingredients and from there they will improve the flavors by adding salt, sweeteners (corn syrup), and fats (mostly trans fats from soy). Since taste is only half the battle they also take great care to make their food look pretty. Maybe they’ll add Yellow 5 or Yellow 6 (both of which have been banned by most European Countries¹) or maybe they’ll use carbon monoxide in their packaged meat.

TLC published the following article on their website ‘Top 10 Most Common Ingredients in Fast Food‘. During their research they found that the Big Mac from McDonald’s contains 67 distinct ingredients! I’m sure if we were to try and build something comparable at home, we’d never end up with 67 ingredients in our burgers because we don’t have access to McDonald’s magic chemistry kit.

Now that I have a greater understanding for the message in Cooked I’m even more excited to pick up a copy. After all we are always looking for more “localvore flimflam” over here anyways. Gotta love Colbert!

What other downfalls do you see or concerns do you have about corporations cooking for you?

¹ Wikipedia ‘Criticism of the Food and Drug Administration‘ 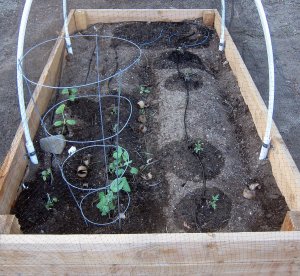 P.S. Here’s a photo update of garden bed #1. So far I’ve had 3 transplant casualties and may have a fourth soon; though I’ve been thinking that for awhile now and the little guy just continues to hang on! To be honest I forgot which plant he is, I think a Japanese eggplant, but he’s going to have to survive for me to know for sure.

The other deaths included one of my Brussels Sprouts which I accidentally snapped during transplanting. If you look closely you can see him laying in the dirt gutter towards the back just to the left of tomato number three (or is it tomato number four? You will notice a gap in the tomato row where one of them died as well). I figured the least I could do is let him compost and give something back to the bed.

And speaking of composting you’ll also see cut toilet paper rolls. I used these to screen the plants from the wind when they were really tiny. The rolls worked great but now I’ve given each plan it’s own stick to lean on, so into the gutters they go too!

I just planted potato seedlings under the drippers in the far back right. It will be interesting to see if I get anything from them or not.

Finally here is the skeleton for bed #2 which I built today. Time to start digging! 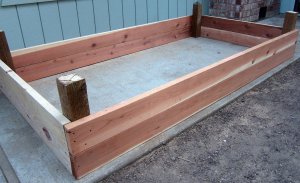